On January 6, 1903, the City of Fairmont purchased 31 acres of hilltop land known to the old-timers in the area as Log Cabin Hill. This site, 462 feet above the Tygart Valley River was selected because it was one of the highest points in the vicinity (1,260 feet above sea level).

One mile from Fairmont’s city limits the land originally was bought for a waterworks purification plant and emergency reserve water supply that would protect the city should the pumping plant fail. Fairmont purchased an additional 6+ acres on March 10, 1905. After realizing that the purification plant needed a caretaker, a fine brick house was built. Then on Jul 1, 1922, another 8+ acres of land was purchased as a general improvement to expand the reservoir property. During the summer of 1927, a coal mine was in operation on a tract of land adjoining the reservoir property. Core drillings were being driven toward the location of the 21,000,000-gallon storage tanks. Fearing serious damage to the tanks, the city felt it necessary to purchase an additional 25+ acres as a protection measure. The property was wild, rough, and was left neglected.

What’s in a name

In 1932, J. Claude Morris was the city water director. It was his idea to utilize the property for a city park. He had the assistance of several work relief agencies that provided men and materials. A splendid park was developed under his supervision. Director Morris died in office on February 24, 1939. As a memorial to his name, the city board passed a resolution officially naming the site Morris Park.
Today there are 145 acres, about 50 of which are still heavily wooded. Many evergreens and species of trees have been planted and labeled. The one-mile long road around the park is paved. Picnic tables, rustic fireplaces, drinking fountains, a tennis court, playground, and pavilions have been added over the years. 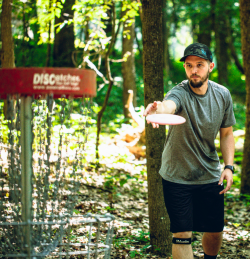 Additionally, Morris Park is home to the Seth Burton Memorial Disc Golf Complex that includes Orange Crush Seth Burton Courses. And this year marks the 13th year that the United Way of Marion and Taylor Counties and South Fairmont Rotary have partnered to put on the Celebration of Lights.
The park continues to be a wonderful place for a day’s outing.

What are your fondest memories of Morris Park?