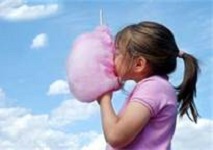 In 1897, William Morrison and John C. Warton, candy makers from Nashville, Tennessee, invented a device that heated sugar in a spinning bowl that had tiny holes in it.  As the bowl spun around, the caramelized sugar was forced through the tiny holes, making a treat that they originally called “Fairy Floss.”

Two years later this invention was patented. Fairy Floss made its claim to fame, when it was introduced at the 1904 St. Louis World’s Fair. Guest paid a whopping 25 cents a bag.  It wasn’t until 1920 that this treat renamed cotton candy.

Do you know when the phrase “under God” was inserted into the pledge of allegiance?

Originally composed by Francis Bellamy in 1892 and formally adopted by Congress as the pledge in 1942. The Pledge has been modified four times since its composition, with the most recent change adding the words “under God” in 1954.