Big things are happening at Palatine Park!  Now along with summer fun, visitors can now enjoy a beautiful depiction of Marion County’s history. Johnnie Johnson, also known as the Father of Rock and Roll, is a Fairmont native, born in 1924. Being inducted into the Rock and Roll Hall of Fame, Johnson is famous for his jazz, blues, and rock and roll medleys. Johnson is remembered with an annual festival showcasing the impact he had on blues and rock & roll.

Col. George S. “Spanky” Roberts is the first African American military pilot from West Virginia. After receiving his pilot’s license in the Civilian Pilot Training Program, Roberts entered aviation cadet training with the first class of Tuskegee Airmen in July 1941, the “washing out” rate was high, with only five of the 13 in George Roberts’ class graduating.

Julia Pierpont is the wife of Francis H. Pierpont, often referred to as the Father of West Virginia. Mrs. Pierpont is accredited with starting Decoration Day, now known as Memorial Day. She is buried alongside her husband at Woodlawn Cemetery.

“Aunt Hat” Wilson (Harriet, Hattie, Little Hat Wilson Whitely) is thought to be the last slave sold in West Virginia showcasing the significance of history from around the time of the Civil War. She lived in Fairmont when the old suspension bridge leading into downtown Fairmont was built and her image will look out over the space where the old bridge used to cross Monongahela River. It is believed that she and her family belonged to a man who built the suspension bridge.

Finally, a depiction of a traditional West Virginia coal miner pays tribute to the heritage of the area as well as all the brave men who lost their lives serving the great state of West Virginia. 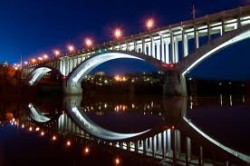 Importance of the railroad

On January 22, 1852, the Baltimore and Ohio Railroad reached the west side of the river to open up Marion County for economic development and expansion of the area’s coal mining industry. Also that year, an 850 feet suspension bridge hanging from twin stone towers to accommodate foot and wagon traffic linked Fairmont and Palatine. The bridge connected Madison Street in Fairmont to Water Street in Palatine

By 1892, West Fairmont, the incorporated area from Coal Run Hollow to the Watson Farm, was the third town contiguous to the banks of the Monongahela River. In 1899, Fairmont, Palatine, and West Fairmont were all merged into a single city with the name “Fairmont‟ retained for the growing city of 2000 residents.

By 1908, the old suspension bridge was replaced with an iron structure maintaining Water Street‟s importance as the main access to the east side as well as to Morgantown Pike.

However, several developments drastically altered Water Street forever. The construction of Monongahela Railroad line and depot in 1917 and the completion of the 1266 feet long “Million Dollar Bridge” (Jefferson Street Bridge) in 1921 created a turn of events that encapsulated Water Street, which took on a very different life for the next 36 years in Fairmont history.

The railroad retaining wall and the new Jefferson Street bridge blocked Water Street from view. By 1922, Water Street began its decline into a shadowy area where one did not go other than quickly passing through to or from the Iron Bridge. The two hotels closed and transitioned to boarding houses. Retail businesses and restaurants relocated. The vacated buildings allowed this encapsulated waterfront to be honeycombed with hiding places.

La Familia de Vagabonda, a crime syndicate associated with the Gambino Crime Family operating out of Baltimore, found a home in the back of a barbershop there. Brothels, drug traffic, gambling, and illegal liquor became the primary businesses by the 1930s.

The bond issue was paid off over subsequent years by a 5 cent toll to cross the iron bridge (now known as the “nickel‟ bridge). In 1957, buildings along Water Street were purchased, condemned and razed. Once cleared and graded, community organizations provided labor, materials, or contributions to create “Palatine Park.” By 1959, landscaping with trees, evergreens, and flowering shrubs was the first phase of the project headed by the Fairmont Park Commission. A lighted fountain, a bandstand overlooking the river, and curving staircases were added during the following years as improvements continued.

Although Ned Smith (a noted West Virginia newspaperman) passed away in 1959, his longtime hope for a “Water Street Park” had finally become a reality for the city. The park was dedicated May 26, 1963, as part of the Marion County WV Centennial Celebration!

Palatine Park has gotten several upgrades since that dedication and it continues to be an integral part of Marion County as a place for outdoor recreation and family entertainment.

What is your favorite feature of Palatine Park? Special thanks to Dr. Raymond Alvarez for researching and writing some of the information featured.