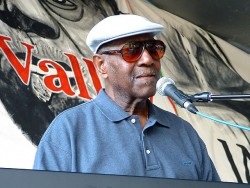 The icon behind Fairmont’s annual blues and jazz festival, The Johnnie Johnson Festival, Johnnie Johnson was a musical pioneer known as the “Father of Rock’ n Roll.” Starting from modest beginnings in Fairmont, Johnson began his music career as a four-year-old playing piano in Marion County. From there, Johnson grew into a well-known musician to all jazz, blues, and rock enthusiasts across the globe. Johnson collaborated with Chuck Berry for many years, and together they made music history. Throughout his career as a pianist, Johnson also worked with the brightest musicians globally, including Eric Clapton, Keith Richards, Albert King, Bonnie Raitt, and more. After being rediscovered in the late 1980s, Johnson went on to have a very successful solo career and was nominated for a Grammy award. In 2001, Johnson was inducted into the Rock and Roll Hall of Fame. Johnnie is commemorated with a Folklife Legends & Lore marker and mural at Palatine Park.

Julia Pierpont, wife of Francis H.Pierpont, the “Father of West Virginia,” possesses her own claim to Marion County fame. Julia is credited with being an originator of the nation’s Decoration Day, which was renamed Memorial Day in 1882. In May 1866, Julia and several teachers and children decided to decorate Union soldiers’ neglected graves in Hollywood Cemetery in Richmond, Virginia. As news of this event spread, people nationwide were inspired to decorate the local graves in their towns. Francis H. Pierpont, Julia Pierpont, and three of their four children are buried at Woodlawn Cemetery in Fairmont.

Another historic holiday, Father’s Day, was first observed in Marion County on July 5, 1908. While we now celebrate Father’s Day by spending quality time with our family, this holiday’s beginnings were not as festive. After one of the worst explosions in mining history on December 6, 1907, the town of Monongah was grieving the loss of hundreds of men, many of which were fathers. Grace Golden Clayton of Fairmont was mourning her father’s death and asked her pastor, Dr. Robert Thomas Webb, to hold a service to honor fathers at the Williams Memorial Methodist Episcopal Church, now known as Central United Methodist Church. The church held the service on July 5, the closest Sunday to Clayton’s father’s birthday. This wouldn’t be a list of Marion County legends without the renowned pepperoni roll! This delicious culinary favorite was first created in Marion County in the 1920s as a staple for coal miners to take underground. Giuseppe “Joseph” Argiro, an Italian immigrant and coal miner, is credited as the pepperoni roll creator. Argiro opened Country Club Bakery in Fairmont in 1927. The classic pepperoni roll is a soft, white yeast bread roll with pepperoni baked in the middle. Today, you can try the numerous variations of this beloved West Virginia foodstuff at Country Club Bakery, Colasessano’s Pizza and Pepperoni Buns, Mario’s Restaurant, Noteworthy Sweets, and Short Story Brewing.

Robert Tinnell and Feast of the Seven Fishes Festival

Along with the pepperoni roll, the Feast of the Seven Fishes Festival is another piece of Marion County’s culinary history. In 2005, Marion County native Robert “Bob” Tinnel published the graphic novel Feast of the Seven Fishes. This book is based on his experiences growing up in an Italian-American family and, specifically, the popular Christmas Eve tradition. The following year, Tinnel and his wife, Shannon Colaianni Tinnell, collaborated with Main Street Fairmont and the community to organize the first Feast of Seven Fishes Festival. This annual event has thousands in attendance each year. On November 15, 2019, a film version of “Feast of the Seven Fishes” was released. The film, which was shot in West Virginia, was written and directed by Tinnell and based on his book. In addition to this work, Tinnell has directed several popular classic horror films and music videos.

Mary Lou Retton, known as “America’s Sweetheart” in the 1984 Los Angeles Olympic Games, is a famous Marion County sports figure! Retton grew up in Fairmont and attended Fairmont Senior High School before competing in the Olympics. She won the all-around gold medal, as well as two silver and two bronze medals. Retton then became the first female athlete face of Wheaties cereal and an inductee into the International Gymnastics Hall of Fame. In honor of her achievements, the Mary Lou Retton Youth Park in Fairmont is named after her.

The famous creator behind America’s cherished comic strip “Ziggy,” Tom Wilson was born in Grant Town to a coal mining family. According to those close to Wilson, he was born drawing. After serving in the United States Army in the 1930s, he attended the Art Institute of Pittsburgh. Post-graduation, Wilson worked in the creative department of American Greetings before his drawings were discovered. “Ziggy” began showing up in newspapers, lunch boxes, candy, cups, and television. The 1992 animated program “Ziggy’s Gift” won an Emmy for its portrayal of the beloved character.

Growing up in Fairmont, Colonel George “Spanky” Roberts would become the first African-American military pilot from West Virginia! In Fairmont, Roberts graduated from Dunbar High School before attending what is now West Virginia University for a degree in mechanical arts. After training as a pilot, Roberts joined the acclaimed Tuskegee Airmen and was commissioned as a second lieutenant in 1942. The Marion County pilot flew more than 100 missions in North Africa, West Asia, and Europe before World War II ended. In Marion County, Roberts is honored with a bridge between First Street and Cleveland Avenue named in his honor.

Considered by many to be one of the greatest coaches in college football history, Nick Saban got his start in Marion County! Saban grew up in Monongah and graduated from Monongah High School. While in high school, Saban played quarterback on the 1968 West Virginia state championship team. He went on to attend Kent State University where he played defensive back. After coaching numerous NFL and college teams, Saban took over as head coach for the University of Alabama’s Crimson Tide in 2007. He has won seven national titles as a head coach, the most in college football history. In 2013, he was inducted into the Alabama Sports Hall of Fame.