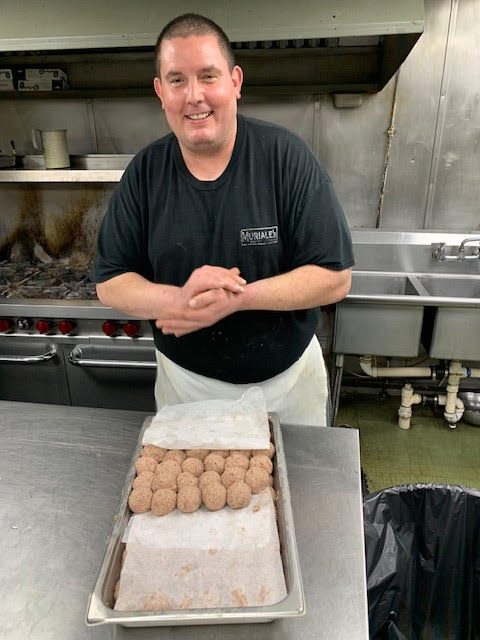 “I like the grind of it. You know there’s always something to do. There’s not a lot of standing around. It keeps you busy, you know what I mean, just the grind of it, just constantly. It’s a lot of hours and stuff, but you get used to it. And I just like the action,” said Andrew Kendziora, Muriale’s kitchen manager.

Drew has been the man behind Marion’s meatballs for 16 years.

His day starts at 6:30 a.m. checking orders from trucks delivering produce and dry goods. Then, he starts making sauces before moving onto the meatballs.

“We put them together and then we actually have to scoop them out. That’s where the hardest part of it is. When you first start out, you’re pretty slow. But once you get your technique down, it just becomes natural. Just today we did four batches of meatballs. That’s about 400 per batch which translates to 1600 meatballs,” he said, adding that they’re preparing for Valentine’s weekend.

During the weekdays, they make two batches a day, sometimes three batches on Thursdays. When the weekend hits, it could be three, four or five batches! With that kind of workload – not taking into account all the other popular dishes – it takes a lot of teamwork behind the scenes. “Oh, it’s a show … If it’s a busy night, you see a lot of teamwork. I mean, that’s what it’s about. If you’re not working as a team on the line, a lot of bad things can happen. You’ve got to get each other’s backs. No one’s perfect. There’s gonna be mistakes, but you got to work as a team to fix the mistakes,” he explained.

With the kind of hours required to be the best of the best, he said the kitchen staff is like a family to him now.

“We all know what’s going on in each others’ lives, you know, we spend a lot of time together. We’re always looking out for each other. Sometimes somebody gets down, or something is going on, and this person needs that. We’ll come through, and we’ll take care of them.”

Some weeks he works 70 hours, so when he gets time to himself, he likes to watch sports and go to local sporting events, especially when his alma mater, North Marion, is playing. When he has a day off, his favorite places to eat are Sargasso’s in Morgantown or The Wonder Bar in Bridgeport for his favorite food, steak (and different kinds of sauces). For now, though, he’s in the kitchen. As he and his team work to make Valentine’s weekend something special, he’s also planning for the spring. He’s considering some different fish dishes then, but what’s happening now is butter! He and Rocco Muriale (the owner… obviously) decided to start making butter in-house. The decision was a collaborative one that took into consideration the aesthetics of homemade butter and the cost-effectiveness of it. Drew said they might consider doing some different herbed butters or expanding the types of bread offered in the future.

What the chef eats

However, what he loves preparing at Muriales or at home for himself isn’t butter or meatballs, but sauces. Being a chef isn’t much of a stretch from being an artist; what he loves doing is creating different kinds of sauces. Italian food, of course, is his favorite, but French food is a close second because of all the sauces used as well.

One of the most popular dishes there, he said, is the chicken parmesan. He and the staff try to keep up with trends they notice from the customers and from the generations as a whole. Drew said millennials are generally wanting to branch out and order some of the more unusual dishes, so he tries to cook accordingly. His favorite dish, however, is something more classic and timeless.

“Aunt Mary basically cooked everything here and came up with everything as far back as when it started. God rest her soul, you know, she passed away. But it’s her recipe, and it’s probably the best lasagna I’ve ever had – ever. The lasagna is just fabulous. That’s my favorite dish here.”

Drew cooks meatballs, lasagna, chicken parm and everything else seven days a week, so now when you eat there, you can think of him. And give your compliments to the chef!

What’s your favorite dish at Muriale’s?